A downloadable game for Windows and macOS

We are currently on Kickstarter and Greenlight! The PC and iOS Demo is available now, and we are updating regularly - check it out RIGHT NOW!

Legends of Callasia is a simultaneous turn-based single and multiplayer fantasy world conquest strategy game mixed with board game-style maps and no hotseat waiting, playable on PC, Mac, iPad, and Android tablets.

The goal is to make a game that has the feel of a large, epic strategy game like Civilization, Crusader Kings 2, or Heroes of Might and Magic, but with the shorter playtime and simple controls of a game like Risk, Lux, or FTL. A game that is easy to learn, fast to play, but which offers enough choice to make it interesting to play over and over again. Every game session is a new experience! Legends of Callasia is a classic strategy game designed for strategy gamers who want all of the thrill of exploring, building, and conquering - but who want a game that can be finished in an hour or two. The game can be played in Skirmish mode, which allows one-off single player combats; Campaign, which allows the player to fight through a series of more immersive, scripted combats; or Multiplayer, with up to 6 players in a single map.

All games begin by selecting a map. The maps vary in size, and offer different configurations of land, resources, and tactical objectives.

For each game, you must choose your Faction. Choosing a Faction determines which Heroes and Troops you will have access to, and which Bonus Cards you will receive. This is one of the most critical decisions of the game.

Factions include: The Faeborne - wild creatures of the forests and mountains, the Revenant - undead creatures summoned to the earth to kill and destroy, and the Hundred Kingdoms - warring humans and their allies.

Select four Heroes that will be available to you in this game - but choose well! Each hero has a Profession, which determines which Bonus Cards you will draw each turn. Additionally, they have Special Abilities, which change the how the armies under their control will fight.

Build armies of various kinds of Troops to conquer the lands. Each Faction has access to 6 different Troop types. Basic Troops are available at the beginning of the game, while Advanced and Elite Troops require building structures that support them.

Organize your Heroes and Troops into Armies which you can move around the map to fight other Heroes, conquer Lands and build Kingdoms. Occupy Lands and Kingdoms to earn Victory Points and Gold.

Use Gold from your Lands and Kingdoms to hire more Troops and Heroes. You can also use Gold to improve your Cities and Lands. City Improvements allow access to better Troops, create defensive barriers against attacks, produce more Gold, and increase the limit on how many Troops you can support.

Plan your attacks simultaneously with the other players every turn. When all of your plans are complete, end your turn to resolve all of the actions and battles. The simultaneous Plan/Resolve cycle is a completely new way of looking at strategy games that allows for fast, intense multiplayer games that do not have the tedious "hot seat" waiting of most turn-based strategy games, or the "stressful clickfest" of RTS-style games. Additionally, planning your moves without knowing what your enemy is planning adds a completely new and fascinating level of strategy to the game.

Use Bonus Cards to support your attacks and actions. Each Faction and each Hero Profession allows access to different cards that can help you attack, defend, build, and more! Sometimes playing the right card at the right time can be the difference between a crushing defeat and an epic victory! 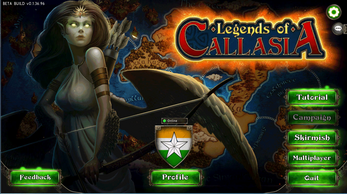 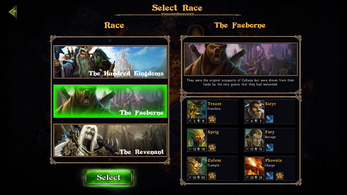 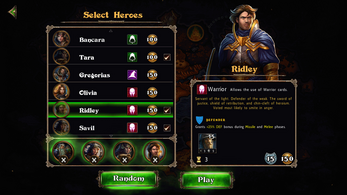 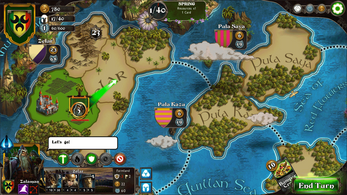 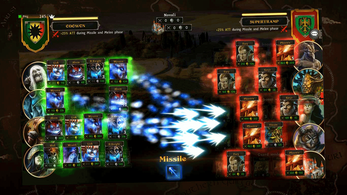 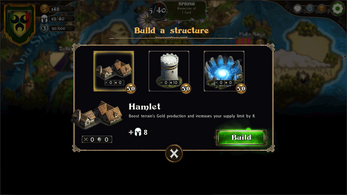 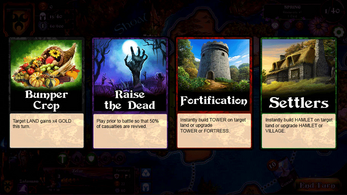 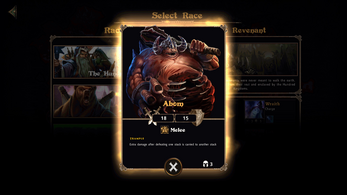 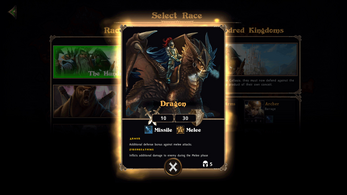 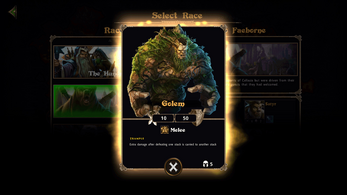